Who Gave The Smallest Floral Arrangement at Aretha’s Funeral

She sang, “R-E-S-P-E-C-T, find out what it means to me.” Soul legend Aretha Franklin’s booming voice and iconic career influenced generations of singers. So when the Queen of Soul died last year, thousands of mourners poured into the Charles Wright Museum of African-American History to pay their respect. 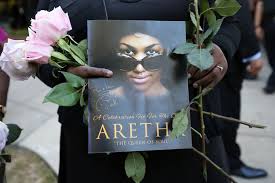 Because of Franklin’s influence, those who could not attend the memorial or funeral services did what we all do. They sent flowers. 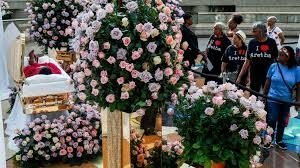 Flower Power’s contributing correspondent Roger Friedman was a friend of Franklin’s and attended the invitation-only funeral at Greater Grace Temple in Detroit. As he entered the lobby, he noticed the lush bouquets, filled with lavender roses, yellow roses, orchids and all Aretha Franklin’s favorite flowers.

He also noticed something else. “Diana Ross’ hydrangea arrangement was the smallest of all.” 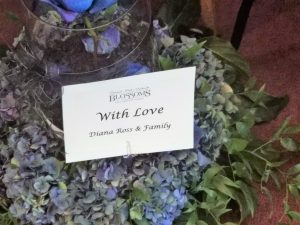 The florist who provided the arrangement, Blossom of Birmingham, Michigan, relayed the information that it was actually a blue rose (“We painted it,” said Christina, of Customer Service) enclosed in glass, and surrounded by blue hydrangeas. Blossom also supplied flowers for all the ceremonies throughout the week. “Aretha Franklin loved pink roses especially, gardenia bowls, orchids,” Christina said. 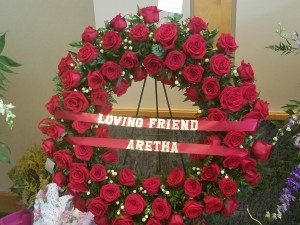 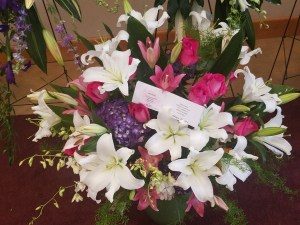 At first, Friedman says he didn’t notice the flowers.. He was, after all, in mourning. But then a woman behind him, he says, “sort of gasped and exclaimed, ‘That’s all Diana Ross sent!!’”

Friedman, who did not know the woman, replied, “Well, it’s a funeral, we shouldn’t…”

The woman, who said she was  from Detroit, said, “Don’t start defending Diana Ross!”

Diana Ross and Franklin were contemporaries, grew up in Detroit and had many friends in common. What the woman meant was that Ross is a multi-millionaire and could certainly have sent something bigger, flashier.

Local florist Blumz by JR Designs, a member of the Society of American Florists, created many of the beautiful arrangements to honor Franklin at the memorial and church. Blumz co-owner Jerome Raska personally delivered an arrangement of anthurium, orchids, ginger, monstera and roses to the memorial, where Aretha Franklin’s coffin rested between displays of pastel roses. 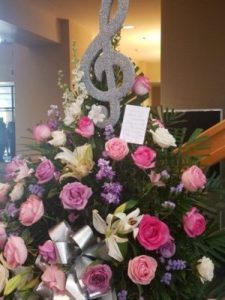 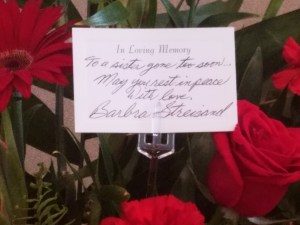 Roger Friedman took note. “I focused on all the generosity,” he says. “The arrangement from the Four Tops was like a Christmas tree with a big musical signature on top in silver and both Sam Moore and Mariah Carey sent spectacular crosses made out of flowers.”

Aretha, he adds, would have loved the attention and love, both big and small.  – Annabelle Chase